This film has been designed for small tunnels, double greenhouse covers and floating cover.

DC double covers can be thermic or non-thermic with high transparency.

The most important factor for a greenhouse is to ensure plants can grow at an optimum thermic level.

To reduce risks, we recommend the utilization of thermic covers to delay cooling during the night, preventing heat loss.

To provide crops with greater thermic protection, we recommend a double cover, which whilst not obstruction radiation to the crop, still allows a high transmission of light and optimum thermic effect.

Used as a sun blind, combining an air layer between the films with the thermicity of DC film, the cooling in the greenhouse is delayed, and temperatures are more stabilized throughout a 24 hours cycle.

DC Double Covers can be supplied with Antifog effect if required, thus avoiding condensation inside the double cover. The sheet must be fitted with a convex effect to allow the droplets to run off the material.

Droplets have a mirror effect, which adversely reflect radiation and reduce transmission of visible light within the greenhouse.

DC Double Cover will also help to increase and advance an early yield. 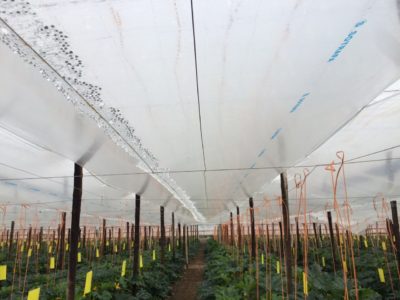