What is a mulch film?

Mulching is an agricultural technique that involves covering the soil with special films to prevent contamination of the crops and the soil from atmospheric agents, which can dry the ground, deteriorate fruits, cool the earth and displace fertilizers, thus it is necessary for vegetative development. It also helps by preventing weed growth.

In addition, mulching gives higher yields and earlier crops. It is one of the most widespread agricultural techniques, as its results are very satisfactory and the process does not involve great cost.

Sotrafa offers a complete range of mulching films, called Sotrafilm Range, which can be adapted to the farmer’s needs.

Among the main characteristics and benefits of Sotrafilm we can highlight:

· Prevents the evaporation of water from the soil, giving the crop a constant and regular feeding.

· Avoid large fluctuations in soil temperature between day and night.

· Makes the land more fertile and stimulates the absorption of nitrogen by the plant.

· Prevents weed growth due to the opacity of some plastic films and the high temperatures under them.

· Prevents the fruit from being in contact with the ground. The fruit then has a more attractive appearance that makes it commercially advantageous. 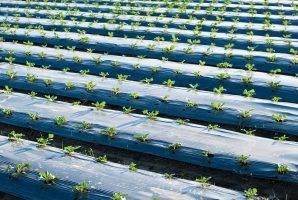 Transparent Sotrafilm NT is mainly used on outdoor crops, to increase precocity. It aims to defend crops and soil from atmospheric agents and the movement of fertilizing elements, so necessary for the vegetative development of the plant.

Black mulching film is commonly used both inside and outside the greenhouse. It prevents the weeds growth due to the opacity of the film.

The black additive gives it an extra durability.

Sotrafilm BN is a bicolor film (white / black) and is highly recommended for those crops that require great luminosity and a decrease in temperature at the root level, since the white part reflects 60% of solar radiation and gives an extra contribution of light.

Sotrafilm NR is a bicolor film (black / silver) that reflects a large part of solar radiation (45%), so the plant has an extra light contribution that can benefit certain crops.

This sheet works as a filter for incidental solar radiation. It absorbs that part of the solar radiation that is necessary for photosynthesis and lets through the thermal radiation needed to heat the soil.

Especially recommended for crops where heat is needed in the root system, these products also prevents weed growth.

Manufactured with vegetable resins that will be Bio-degraded by the action of atmospheric factors, by the contact with the crop and the ground, until they disappear without leaving any harmful element.

Designed as an agricultural mulch in those crops where the correct herbicidal effect is needed, water consumption is reduced, and there is a greater earliness and productivity of the crop, but without the necessity to remove it. This allows its biodegradation and bio-assimilation in the field after its useful life.

All the films in Sotrafa’s Sotrafilm range can be purchased if required with the following specialties:

Please do not hesitate to consult our technical team and they will advise the best option for covering and protecting your crops. 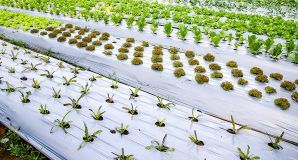